Our family just came back from a week and a half vacation to Orlando, FL. The main purpose of the vacation was to visit with family. However, we were able to spend some time checking out some of the local attractions while there. And while, yes, we did do a day at Disney World (and it was awesome), there are so many other great places for a family to check out that we had a hard time narrowing it down. Before Sebastian was born, we had visited the Orlando Art Museum, but for this trip, we decided on The Orlando Science Center. 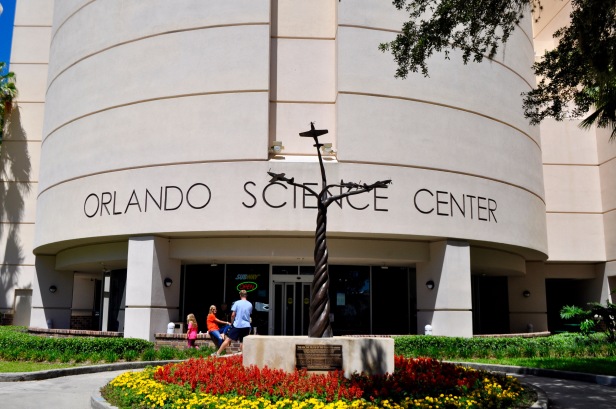 This was mainly due to the recent addition of KidsTown, which is a collection of seven different areas that each focus on a different activity, and are designed specifically for children under seven (Don’t worry parents, you will love it as well). You could easily spend 3 or even 4 hours in the KidsTown section alone, as the activities are very engaging and there is just so much to do. We ended up doing six of the seven areas, where we spent about 2 hours (20 minutes in each), and then ended up spending an additional 20 minutes in the Kinetics Zone exhibit. Additionally, The Center also has an IMAX theater, which shows between 6 and 15 movies a day. If we lived in Orlando, I would absolutely invest in a membership, as I can’t imagine a better place to take my kid during a rainy day.

The first room we visited was the Orange Grove which was sponsored by Dr. Philips. In all honesty, I thought we might spend the whole day in just this room. I was completely floored by the level of educational creativity that was used in this exhibit. The room contained several stations that involved using “oranges” (orange and green plastic balls) to demonstrate different types of motion and mechanisms. Each station was connected to another, so the balls would travel from one to the other through a series of ramps and pathways. My favorite was when the water tower would become full of balls and release them all over the room, while dozens of excited children scrambled to collect them. The room also contained a produce market where kids could organize various times of produce, weigh them and scan them. 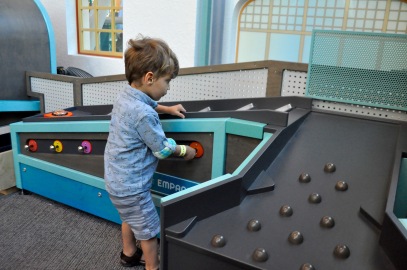 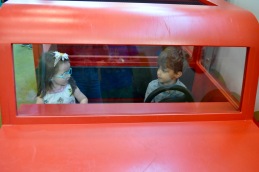 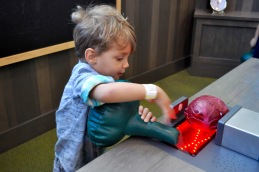 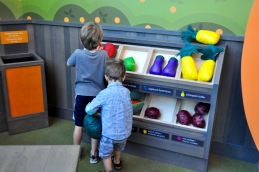 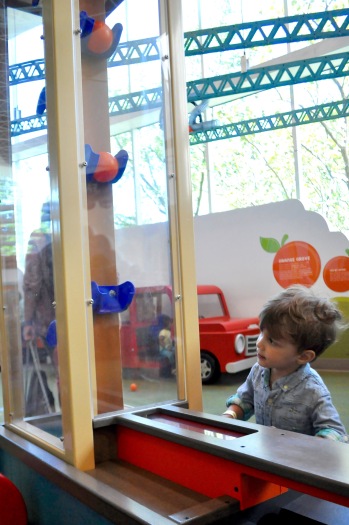 After forcing us to leave the Orange Grove, we entered ClimbTime, which reminded me a lot of those indoor jungle gyms that are popular as birthday venues among the 5 and under crowd. While, I didn’t find this room to be very educational, it did have an area to take your pulse, so you could see the difference before and after physical activity. There was also an area that demonstrated suction and gravity. Like any little boy, Sebastian was not interested in leaving this giant indoor playground…that is, until he saw the next room. 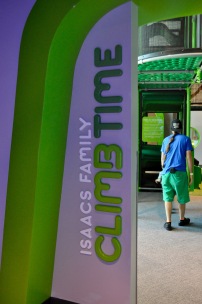 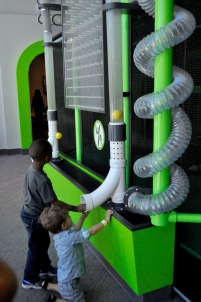 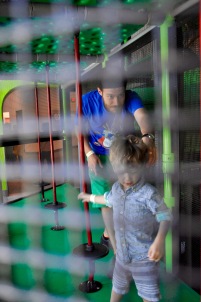 Welcome to the Drip Drop Splash room!! We could barely get a smock on him before he was elbow deep in the activity pools. As the name implies, this room focuses on the properties of water. Children are encouraged to watch objects follow various water currents and provides them with ways to affecting the water’s course and pressure, such as building a damn or funneling water in a certain direction through a specific space. There are also fountains that demonstrate various types of water projection, which can get a bit messy. Thankfully, this exhibit has hand dryers to help dry of any kid who gets a little too inspired (which almost every kid did). 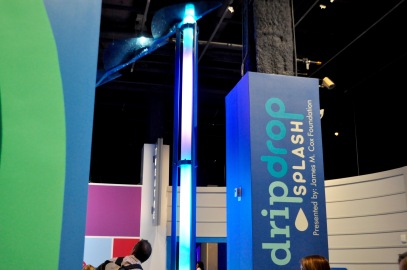 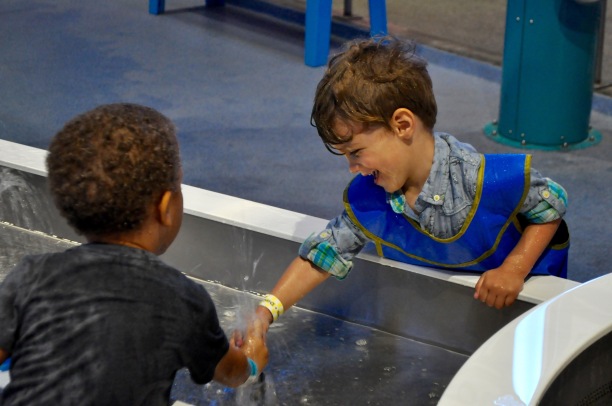 After drying off, we headed to the next room, The Harriett’s KidsTown Theatre. Now this isn’t like your average theater that shows movies. In this theater, you get to create your own!!! I absolutely loved this exhibit and its goal of encouraging creative thinking and imaginative play. The entire room is dimly lit, with a stage on one side and an area for viewing (complete with beanbag chairs) on the other. The stage’s backdrop is a screen that can be changed from a touchscreen off to the side. From exploring outer space, pretending to be a bug, or diving in the deep sea, there are several different experiences for children to choose from. Props and costumes are also provided to help encourage creative role playing. We all had a blast coming up with different scenarios, utilizing the various resources. I think what I like most about this exhibit was the level of creative freedom it allows the participants. While science is typically taught in a very structured manner, this provided a space for children to develop their imaginations. And as Albert Einstein once said, “Imagination is more important than knowledge. For knowledge is limited, whereas imagination embraces the entire world, stimulating progress, giving birth to evolution.”

Following our cinematic adventures, we made our way to the Explore It exhibit at the back of Kids Town. I can’t even begin to talk about all the amazing things going on in this room. I’m not even sure how all of them are connected, other than they are SUPER awesome!! The room has two kaleidoscopes that are projected onto the wall and allows guests to move the pieces and see the change in the projection. It also had a giant light bright board and lots of large foam blocks for building. But the best part were the various apparatuses that demonstrated wind currents. While the exhibit had the usual floating balls above an air vent, the back wall showcased an elaborate tube maze that sucked up scarves and sent them on a wild ride before projecting them out into the room, sending dozens of elated children (and some adults who shall remain nameless) scrambling after them (a very similar sight to when the balls in the Orange Grove room). I have to admit that this was a heavily addictive activity and we spent a great deal of time enjoying it. 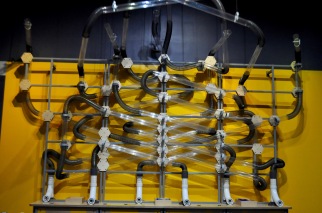 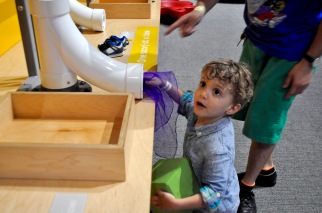 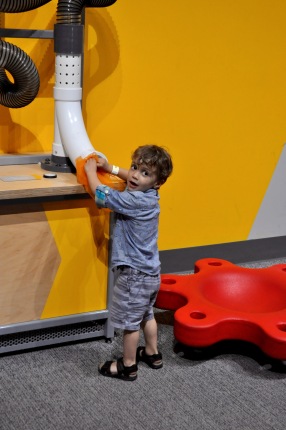 Since the KidsTown Studio didn’t have any scheduled activities at the time we finished up in the Explore It room, we went to the last area of the KidsTown exhibit – Toddler Town. Toddler town is designed for the 0-2 crowd, to be sure that even the youngest scientist has a safe space to experiment and explore. Since the activities are designed for younger children, I wasn’t sure if Sebastian would get much out of it. However, he seemed to thoroughly enjoy everything they had to offer, which was actually quite a bit. And while the exhibit had several traditional toddler toys such as bead mazes, it also had various educational * that demonstrated scientific concepts such as cause and effect. 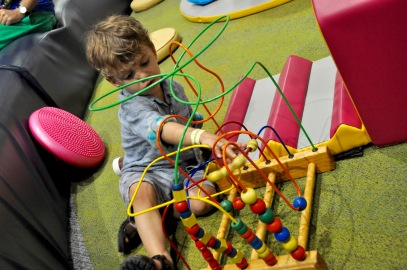 As we were preparing to leave the science center (it had been over 2 hours and we were pretty spent from all the activities), we noticed a sign for the Kinetics Zone. This is not a part of the KidsTown exhibit, but seeing as my husband and I were both artists who worked a lot with kinetics, we couldn’t pass up the opportunity to take Sebastian to check it out. From plasma balls to demonstrations of simple machines, balance and kinetic energy, the Kinetics Zone is a science lover’s dream. When I think of the science centers that I went to as a child, which helped develop my love of science, I think of all the activities held within the walls of the Kinetics Zone exhibit. I could see many future scientists catching the bug in this exhibit. So even though it is not specified for children, do not overlook this one during your visit. 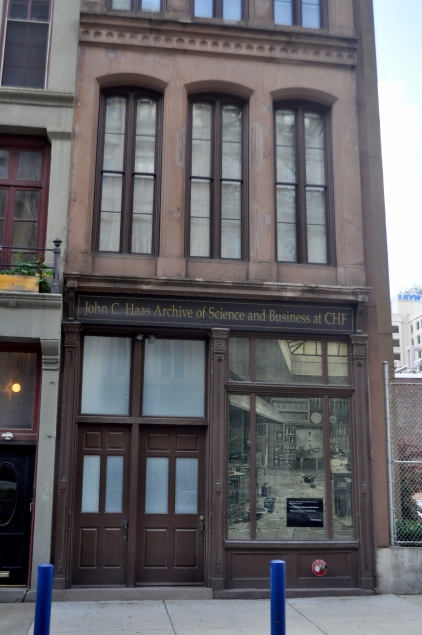 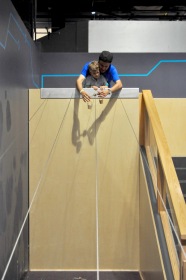 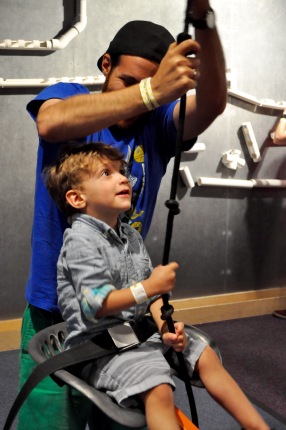 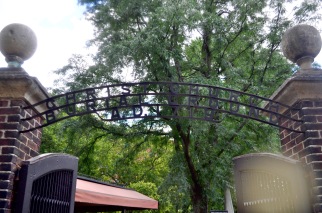 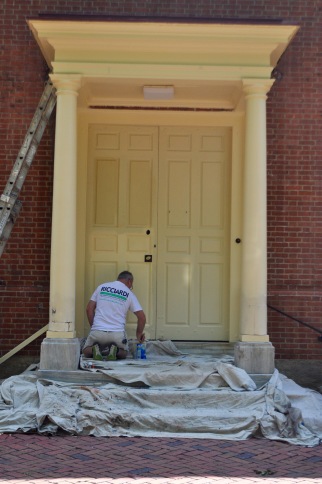 I would definitely recommend checking out The Orlando Science Center to anyone who lives or is visiting the greater Orlando area. It may not be Disney World, but I give it the runner up award for families seeking an activity that is engaging and extensive. You could easily spend an entire day in the place and probably not get to do everything. The Orlando Science Center manages to combine education, entertainment, curiosity, experimentation, and adventure into the perfect package. And it does it while still being affordable and accessible.