Today I had the opportunity to try a unique type of exhibition. The Chemical Heritage Foundation in Philadelphia just opened a walking tour of Old City titled, “Things Fall Apart”. I heard about this project on NPR a couple weeks ago and really wanted to check it out. What interested me about this program was the fact that it used an app as a tour guide and curator. I also figured it would make a great social activity, so I invited some friends to join us for some culture, fresh air, and exercise. Because this was a 90 minute tour, we made sure to take stollers rather than attempt having the children walk. The tour begins outside The Chemical Heritage Foundation on Chestnut St., so we hopped on the subway and our adventure began.

Once we arrived, we discovered that the app was used for walking tours in several towns and Philadelphia was not listed among them. So we went inside to get some help figuring it out. Apparently, you just pick any city and then the option for the tour will come up. The app works with GPS to navigate you through the town, stopping you at the various locations on the tour, which are then curated by the voice of the foundation’s curator, Elisabeth Berry Drago.

The tour began by pointing out the contrasting qualities between the various buildings in the neighborhood. Old City has undergone several transformations over the past couple centuries, with certain buildings being preserved and others being updated. Additionally, new constructions have been incorporated into the original landscape to create an even more complex and diverse visual experience.

The first stop was an old brownstone around the corner from the Chemical Heritage Foundation. We learned that this building was, in fact, only a facade. The door was sealed shut and the inside is where the archives of the Chemical Heritage Center are stored. We continued north, where our tour stopped us at a building that was currently under construction, but had originally been a jail. From there we traveled west to the Arch Street Meeting House, which is still used today. 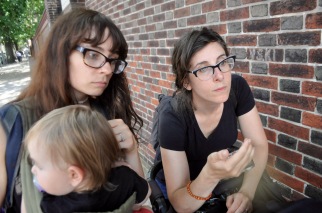 Deep in thought, listening to the tour guide

Originally a jail and later a tuxedo store, this building was currently under construction

Only a facade: This building no longer serves its original function. However, the outside had been preserved to maintain its historical style

Just down the block from the meeting house was the Christ Church Burial Ground, where Ben Franklin is buried. While you cannot enter the grounds without paying, an opening was put into the wall, next to Ben Franklin’s grave, so that people are able to better view it. The tour discussed the ritual of tossing a penny onto the grave, which comes from Franklin’s expression, “A penny saved is a penny earned”. Sebastian particularly liked this part of the tour. 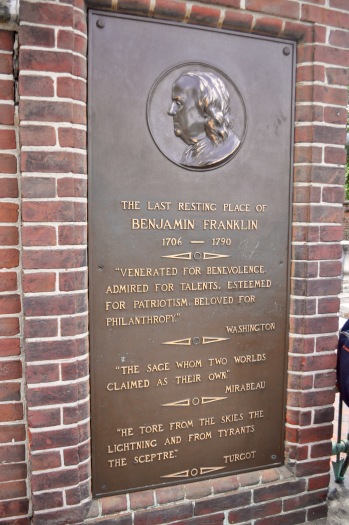 At this point in the tour, the kids started to rebel. Including the subway ride, they had been sitting for almost 2 hours and they were ready to stretch their legs. So we opted to abandon the tour and take them to the park for some fun. That is one of the nice things about a digital tour. You are in the driver seat, so its flexible (which is a MUST when doing anything with small children). And while we didn’t get to finish the tour, we very much enjoyed it and walked away with some new information.